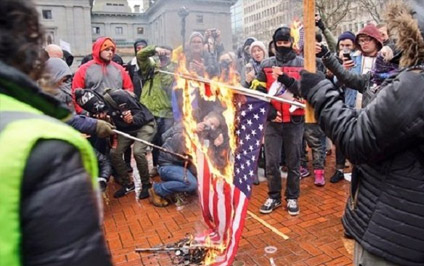 Illegal immigration to the United States is very popular and pervasive for many reasons including the fact that most American border and Illegal Immigration Law go unenforced at the behest of political elites like George Soros, the National Council of La Raza (The Race), and the US Chamber of Commerce.

While US legal immigration is the most generous on the planet, the United States is being terribly abused by almost 20 million illegal immigrants who are stealing jobs, wages, taxpayer resources, communities, and elections with little fear of immigration law enforcement.

Another reason illegal immigration to the US is so popular is that America was once the greatest nation on earth with the best quality of life indicators in the world and top rankings in education, healthcare, incomes, employment, etc…

Unfortunately, America has lost top standing in the world over the years as millions of illegal aliens have poured into the country changing the nature and conditions of the country.

Illegal immigration to the US may eventually slow or reverse one day if American citizens ever succeed in getting their current immigration laws and US Constitution provisions against invasion enforced, or when enough Illegal immigrants come that America becomes the same kind of 3rd world hell hole that many illegal aliens are trying to flee!

As more and more illegal aliens break into America, the US becomes more like the places the illegals are fleeing and less like the nice place everyone wants to live in.

Illegal immigration in the United States, mostly coming from Mexico and across the Mexican border, is a costly and deadly crisis that elites have created to force Americans into an economic union similar to the European Union. This North American Union is unlawful, unconstitutional, and has not been authorized by Congress or the American public, yet it is proceeding.

The nation building planners of the North American Union hope to overthrow the conservative Americans who have dominated American politics for more than 200 years and replace them in their jobs, homes, and elections with illegal immigrants willing to do or say anything for more gains and perceived power.

Instead of national borders being secured, the elites are using illegal immigration and immigration reform amnesty to permanently destroy the shared borders of the United States, Mexico, and Canada to make them into something more like state borders. They plan to maintain security for their power faction through the use of a massive surveillance state similar to those sought by fascist and communist regimes.

This form of enslavement for the populations of America, Mexico, and Canada will yield great profits and power for those conducting this invasion.

A review of the modern history of illegal immigration shows that US illegal immigration is a tool of nation building elites who have massive control and influence in the media and political campaigns of the United States and their goal is to overthrow those in America that would resist their desire for global rule.