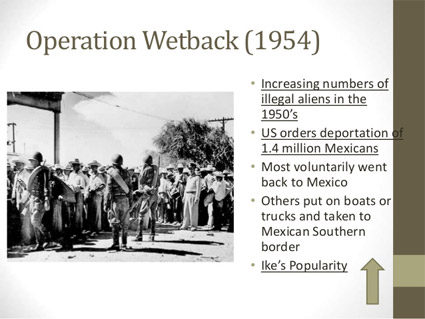 Operation Wetback was a domestic military-style operation conducted under the Presidency of Dwight D. Eisenhower to remove large numbers of illegal immigrants from America in 1954.

America’s Operation Wetback originated from a request by the Mexican government to stop the illegal entry of Mexican laborers who were fueling US illegal immigration.

Many believe that Operation Wetback was a response to American citizen and legal immigrant efforts to report illegal immigrants and to the Bracero Program which was an agreement made with Mexico on September 27, 1942.

The Bracero Program agreement allowed Mexican farmworkers to enter the United States temporarily for seasonal farm work and then return home. Unfortunately, large numbers of Mexican workers violated this agreement and never returned to Mexico as agreed, but instead remained in the US as illegal immigrants.

The term “wetback” was used to indicate that someone had swum across the Rio Grande River to illegally enter the United States and is now considered to be a racial pejorative.

Operation Wetback safely and humanely deported 1,074,277 illegal immigrants turning them over to Mexican authorities. Illegal immigrant supporters in the US point out that some American citizens were deported during the operation, but most of those were minors under the age of 18 who were born to illegal immigrant parents.

American authorities felt it was best to keep minors with their families during the removals.