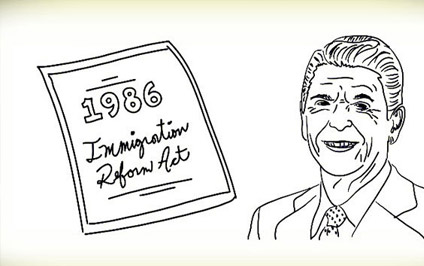 The Simpson-Mazzoli Act of 1986 is also known as the Immigration Reform and Control Act (IRCA), and is often referred to as “Reagan’s Amnesty” since he signed it into law on November 6, 1986.

This Amnesty for Illegal Immigrants bill was supposed to give Amnesty to one million illegal aliens but ended up being given to almost three million!

The three million illegal immigrants who gained citizenship and voting rights from the Simpson-Mazzoli Act are the reason America has more than 22 million illegals in 2021!

While the new law made it illegal for employers to knowingly hire illegal workers and established the I-9 program to screen out illegal immigrant workers and clear legal immigrants, these components of the Simpson-Mazolli Act have never been adequately enforced, leading to tens of millions of employed illegals.

Democrat Representative Romano Mazzoli (D-KY) and Republican Senator Alan Simpson (R-WY), along with President of the University of Notre Dame Rev. Theodore Hesburgh, led the charge to pass this Amnesty legislation, which would eventually lead to Democrat dominance of states like California, to the displacement of tens of millions of American workers, and to the deaths of tens of thousands of American citizens killed by the resulting flood of illegal aliens inspired to enter the US by Reagan’s Amnesty bill.

Since Reagan’s Amnesty passed in 1986, no Republican has carried the popular vote for President in the United States after 1988 with the lone exception of George W. Bush in 2004 who was riding on high approval levels in response to the terror attacks of September 11, 2001.

This is because most illegal immigrants given Amnesty vote more than eighty percent for Democrat candidates.

The Simpson-Mazzoli Act of 1986 turned California from a Republican red state to a permanent Democrat blue state, and any further Amnesty legislation will assure the rest of America’s states do the same if ever passed into law.

In modern times, the vast majority of Americans oppose any form of Amnesty for illegal immigrants and they cite the Ronald Reagan-backed Simpson-Mazzoli Act and the Hart-Cellar Act as reasons why.