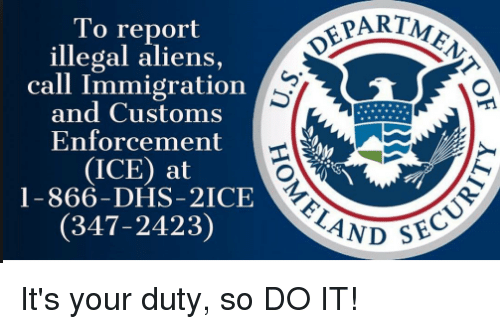 Many people visit this website and others like it to report illegal immigration or to report Illegal immigrants who are stealing American jobs and taxpayer resources, or are engaging in identity theft, document fraud, and a host of other illegal activities.

While we would encourage everyone with solid evidence of illegal immigration or employers hiring illegal immigrants to file a report with the Department of Homeland Security, we have some bad news to share.

There is less than a 1% of a 1% chance that Barack Obama’s Department of Homeland Security or Immigration and Customs Enforcement (ICE formerly INS) will take any action on your report. While it is still illegal to be in America illegally, and illegal for any company to hire an illegal immigration, Barack Obama has suspended most of these immigration and border laws. Anyone that does the research will see many problems with Obama and Illegal Immigration.

Factions in control of the US are currently providing a form a defacto illegal immigration reform amnesty for illegals despite the outcry of protest from legal American citizens!

Remember that you should only file a report if you have solid and direct evidence that people are violating an American Illegal Immigration Law.