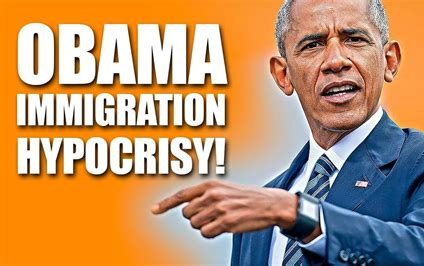 While George Bush was heavily criticized and opposed by many in his own party for failing to secure America’s borders, failing to enforce Illegal Immigration Laws, failing to fine employers that hire illegals, and imprisoning border patrol agents, Barack Obama is even worse on the issue of illegal immigration than Bush!

Obama has encouraged illegal immigration by pushing immigration reform amnesty for illegal immigrants. Obama has even gone so far as to violate his oath of office and the US Constitution by ordering a form of amnesty for illegals called DACA or “Deferred Action for Childhood Arrivals.” This executive decree bypasses the will of Congress and the American public which has defeated several times the Dream Act legislation that DACA is modeled after.

Many American pundits have expressed the opinion that Barack Obama should be impeached for encouraging illegal immigration, Illegal immigrants, and amnesty by decree!

Obama considers illegal immigration to be advantageous to the Democratic Party and his plans to transform America against the wishes of most Americans who are actual citizens. Since the smallest percentage of Americans identify with the liberals that constitute Obama’s base of support, illegal aliens given amnesty by decree can be expected to mostly vote straight Democratic Party ticket.

This means that Obama is attempting to use illegal immigration to overthrow the American Republic and to shift the outcome of future American elections by creating a new voting bloc of 20 million prior illegal aliens.

Obama and illegal immigration must be stopped and their negative impacts reversed via the restoration of Constitutional governance in America and through the adequate enforcement of America’s existing border and immigration laws, otherwise America as you have known it will be destroyed.

Barack Obama should be opposed by every American who knows that illegal immigration and illegal immigrants are bad for America and causing many Americans to lose their jobs, their wages, their taxpayer resources and sometimes their lives.

Barack Obama’s illegal immigrants kill thousands of Americans each year. They die because Obama refuses to protect all states from invasion and refuses to adequately enforce America’s existing border and immigration laws. Obama also creates cognitive dissonance in America by putting out claims that are counter to the real Illegal Immigration Facts of his administration’s true actions.