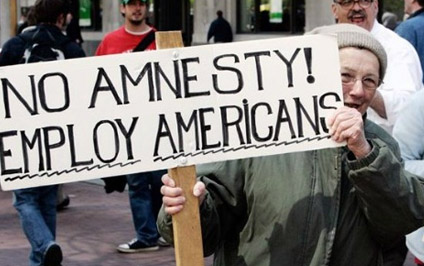 Amnesty is any change in existing border and illegal immigration law that allows illegal aliens and their supporters to have what they want.

In the US, we have an unlawful and unConstitutional defacto Amnesty in place because the Executive Branch under Bush, and now Obama, is refusing to enforce existing border and immigration laws! To understand how bad the situation is, take the time to learn more about Obama and illegal immigration.

Amnesty is also being called immigration reform, Comprehensive Immigration Reform, the Dream Act, and Deferred Action for Childhood Arrivals (DACA) because politicians know how much the American public hates the word amnesty.

Americans hate Amnesty for good reason. In the 1980’s under the administration of Ronald Reagan, politicians passed an amnesty bill, that promised future border and immigration law enforcement that never took place.

The 1986 Amnesty was called the Immigration Reform and Control Act (IRCA)and Simpson-Mazzoli Act. While this amnesty was promised to only apply to approximately 1 Million illegal immigrants, it ended up being awarded to more than 3 million and since none of the enforcement promises ever took place, the results are the approximately 20 million new illegal immigrants in the United States today!

Of course, most of the illegal immigrants that received amnesty under the Republican President went on to vote for the Democratic Party on a regular basis turning California from a red state to a blue liberal one.

Most US illegal immigration today was caused by the amnesty for illegal aliens for 3 million illegals brought us 20 million more in two decades. This means that if immigration reform amnesty is passed again, tens of million more illegal aliens will enter the United States quickly and the majority of American states will go solid blue for the Democrats.

Most of the the illegal immigration facts that concern Americans have been caused by these prior immigration reform amnesty bills and the current defacto amnesty granted by Bush and Obama.

Most Americans oppose any form of amnesty for illegal immigrants, but the percentage of Republican voters opposing amnesty is more than 80% and that is why Republicans like Senators John McCain, Lindsey Graham, Marco Rubio, and Congress members like John Boehner, Eric Cantor, Renee Ellmers, and many others all like and claim that their ‘immigration reform’ is not amnesty.

It is very important that Americans stand against any form of amnesty for illegal immigrants because another one will leave us defenseless as a nation against unending waves of future illegal immigration!