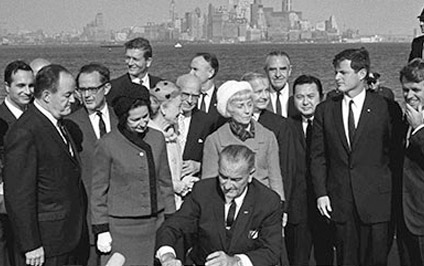 The Hart-Celler Act, also known as the Immigration and Nationality Act of 1965, is considered to be the greatest change to America’s legal immigration laws in modern history.

While DC lawmakers promised US Citizens at the time that the Hart-Celler Act immigration reform would not significantly change the demographics of America, this turned out to be incorrect or a lie as the population of the United States has changed radically in response to this legislation.

The Hart-Celler Act greatly increased the total number of immigrants as well as the share of immigrants from Asia, Africa, and the West Indies, and corresponded to dramatic subsequent increases in illegal immigration.

The Hart-Celler Act was sponsored and promoted by President Lyndon B. Johnson, Senator Philip Hart, and Congressman Emanuel Celler.

This bill was popularly supported by Congress and passed the US House by a vote of 320 to 70 and the US Senate by a vote of 76 to 18.

The main provisions of the Hart-Celler Act were the removal of national origin, race, and ancestry as a basis for immigration, the creation of a seven-category preference system, and a requirement for the Secretary of Labor to certify any labor shortages applying to the act.

Many of the promises to protect American citizens and workers in the Hart-Celler Act go unenforced today, such as the requirement that H1B visa immigrants be paid the same as American workers.